From Beach to Bland

From Beach to Bland

From a cramped and ‘horrible’ two-bedder apartment in Sutherland Shire, to 2.5 acres and ‘chickens, veggies and fresh air’, Ryan and Holly Brooks now battle a different kind of bad neighbour and traffic jams.

“When I lived in Sydney, my neighbours used to play loud music, bang the doors to their apartments at all hours, and could never take the bins out,” said Holly.

“My new neighbours (the kangaroos) are very quiet and keep to themselves. We just have to watch they don’t jump near our car at dusk when we come home from footy training! Also, traffic jams look quite different out here! I still get excited when I pass sheep or cattle on the road. It makes me smile every time!”, she added. 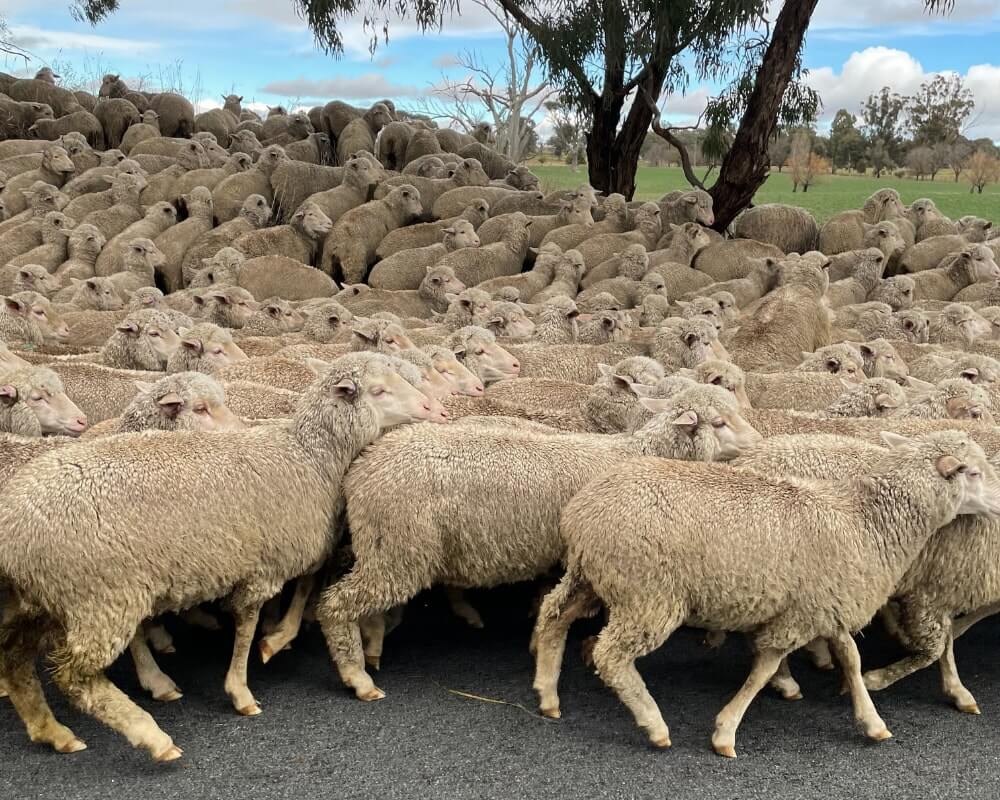 Early morning traffic is certainly different in the countryside!

Ryan and Holly Brooks moved to West Wyalong to work in the mines. The plan was to drive trucks for two years, save money and head back to Sydney with a deposit to buy a house.
Nearly 12 years later, they are now Living The Dream in West Wyalong, in the Riverina’s Bland Shire – where they are well and truly home!

Watch Their Video Interview Below.

Four kids (yes, four!) and two houses later, their busy lives are filled with running a business, footy trips and lots of community events. While Ryan still works in the local Cowal Gold Mine and loves his job and the fact he gets to spend his time off with the kids who are flourishing.

“Our kids are playing football (which is huge in this town!), and the ‘away’ games are in different towns, so our trips can be up to 2.5 hours (250kms) away! One way! Some may whinge about the early mornings, and the travel, but I see it as an opportunity to see the countryside, travel to towns I would have never even heard of, and spend some quality time with the kids,” said Holly. 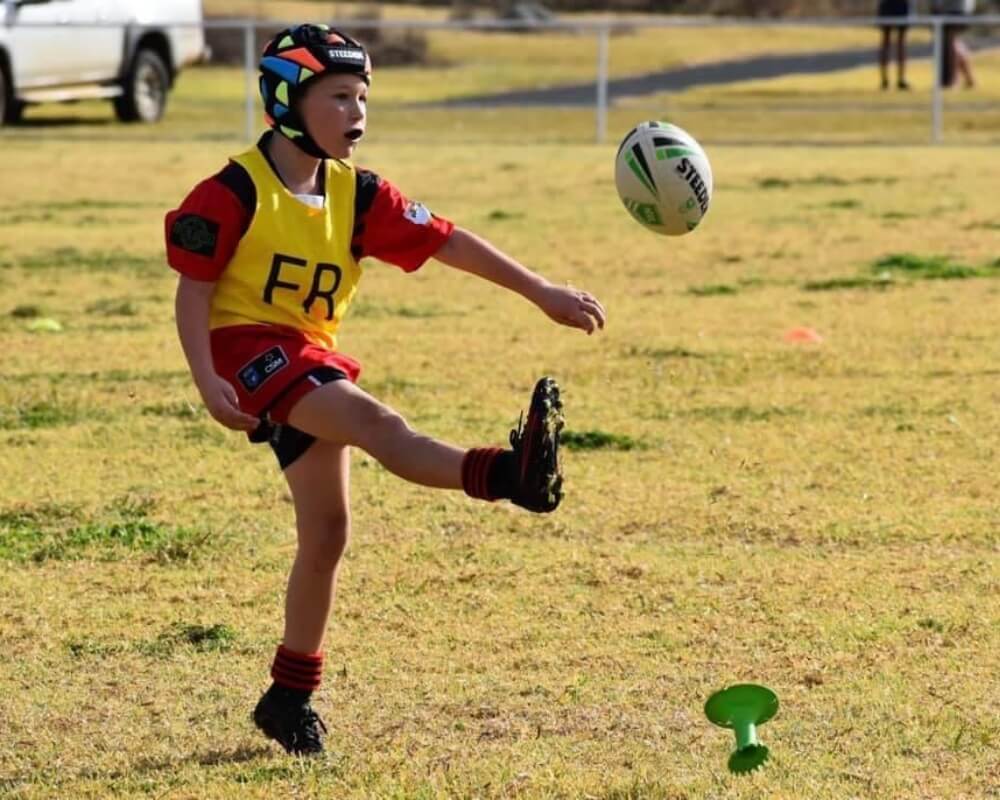 ‘Footy is a very serious game around here’, Travis showing off his kicking skills. 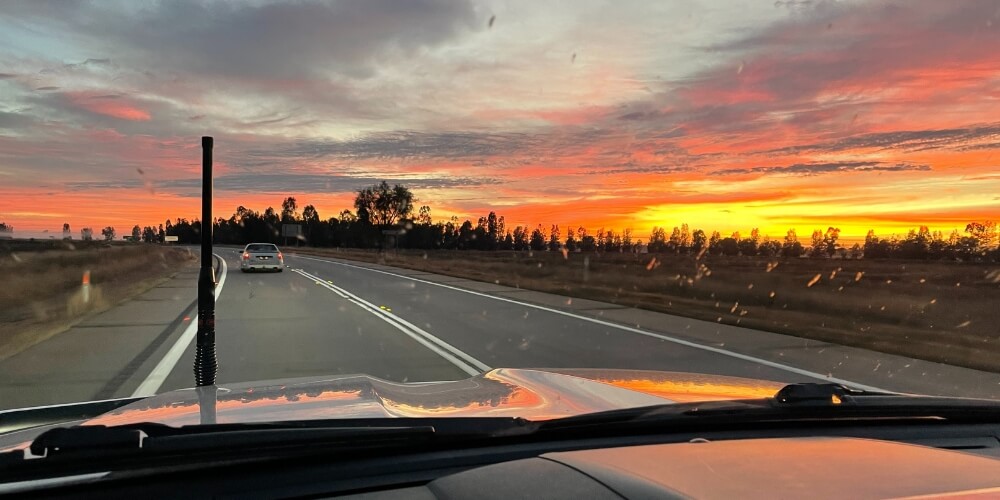 A sunrise shot Holly captured from the car on their way to a footy game in Manildra – bugs included!

Since their move, Holly has also been able to expand her skills, both in and out of the house.

“My mind was always thinking about the everyday differences that I encounter living in the Country. Things that I now consider to be normal, are things that I never thought would ever happen to me. So, I started a page on Facebook called ‘From Beach to Bland.’ And started to document these little things, and I write down all the ‘country-isms’ that I come across.

Also, growing veggies was something I always wanted to try. We had no idea what we were doing when we first started, but with lots of trial and error, learning from other people, asking lots of questions, and laughing at our fails, we have established a beautiful area for our veggies to grow, and a place for our kids to learn where our food comes from,” she added proudly. 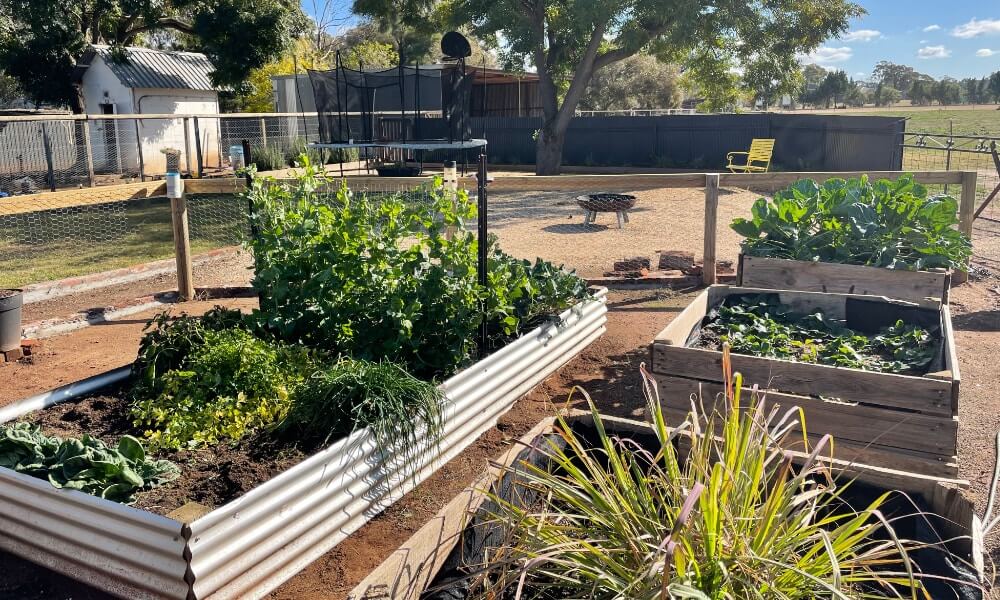 Like most Country-Changers, the Brooks family has fallen in love with their local community and region. Despite common misconceptions people have about country living, their lives have never been more full. Holly, having started several businesses and acting as an advocate for the Shire, is proud to call Bland Shire her forever home and welcomes others considering a move, to check out their ‘far from Bland’ town.

If you are interested in a tree change to West Wyalong or any of the villages in Bland Shire, read more here or, Contact us at Country Change for more information. 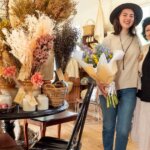 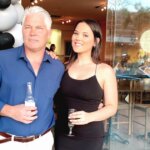